Oh look, Dappy's got a new tattoo. It's of a hashtag and can be found slap bang on his face. So we have to wonder: what's he promoting now? 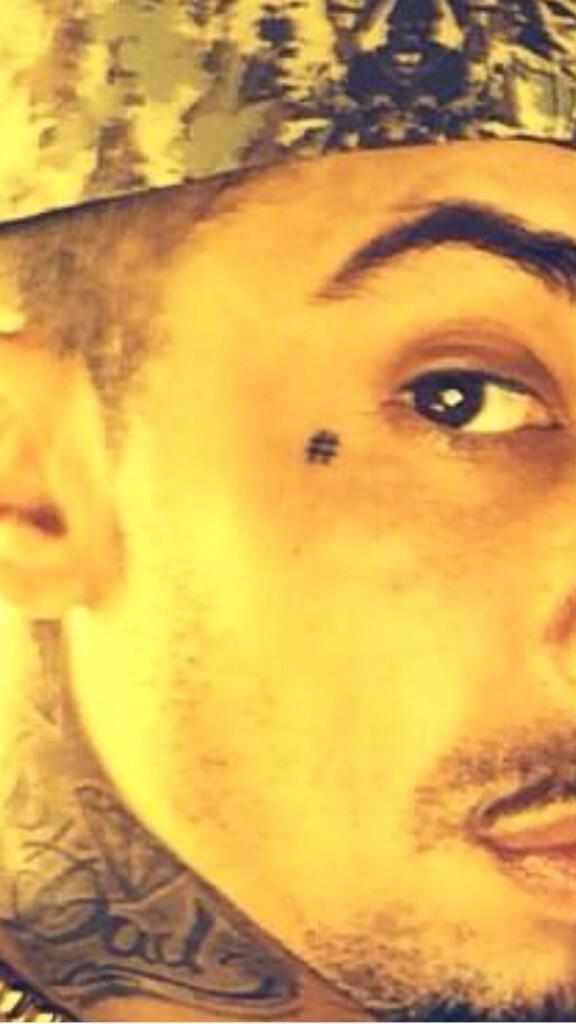 The rapper posted the pic to his Twitter account, accompanied by the message "And by the way, the reason I got a # Tatted on my FACE was simply 2 make sure IT stays trending 4 ever". In case you were interested in his motivations.

Usually when you get a tattoo next to your eye, it's of a tear, and you've received it in recognition of having committed murder as part of a right of passage to become a member of an American street gang. So by contrast, Dappy's effort is infinitely more innocent.

We're also relieved that the oft be-hatted N-Dubz star hasn't been bullying members of the public or getting his dick out too much recently. Shine on, you crazy diamond!

Sometimes naked pictures get leaked online. It is very much the curse of the camera phone and the laptop photobooth option and although we know that all celebrities have private lives we also know that they should be far more aware of who they send their pictures too and aware of how much we as fans might want to see of their bodies.

As it emerges that the recent laptop stealing, private photo sharing scandal regarding Justin Bieber was a fake arranged by PRs to promote his latest album we take a look back at some of the most 'fail' naked artist pictures. Some leaked, some sent out proudly.

Guess whooo - oh it's only Katy Perry naked in the bath with some pizza. Personally when we eat in the bath we get too hot, we also wouldn't balance the pizza on the tray like that, it clearly isn't safe.

It's usually the pictures of naked ladies that get leaked and usually they have taken their own pictures in the first place, not this time. This time it's recording artist Wande Coal and he has been caught asleep and naked and it's gone up on Twitter. If you want to see the unedited version it's here.

This beauty, with some questionable beige pants on is of course Lady Gaga. Totally self posted and totally there for some extra attention, Gaga was certain that we'd all be ecstatic to see her semi nude. Thanks.

Courtney Love then followed suit, again in a chair, again we're not sure what underwear she has on and again, thanks for sharing.

This is Bow Wow lying, seemingly naked on top of another man....This came from a hacked account and was then shared with the Twitter community.

Mcfly like getting naked and sharing. Look at the excitement on that face.

Dappy likes to get naked and drink orange juice. This picture was happily shared with his fans and goes down a lot further than we have shown. If you want to see the full image (with, we are certain a little help from photoshop) then you can find it here.

Kesha proves that she likes to be naked whilst her staff are around her when she Tweeted this from backstage at the VMA's. "J ust naked brushing my teeth pre VMA," .

And back to Justin. The supposedly stolen 'nude' picture that was taken from him is above. Concerning really that a photographer probably actually took it, but not half as concerning as the previous semi naked picture of Justin that was already out and about where he looks like a girl who's brown clothes have shrunk in the wash :

What fans were probably hoping to see however was something like this :

And finally if you want to see Emma Watson naked on the toilet which is kind of irrelevant to the piece but just something funny we came across then you can see it here.

This latest freestyle from Dappy, which will be featured on his upcoming album "Bad Intentions", shows him taking shots at the likes Simon Cowell, Joe McElderry and everyone in between:

"Heard Simon Cowell thinks I’m a w***** and I’m getting on his t*** like cancer and I don’t wanna start mentioning names, where they all now they’re bankrupt.

Joe McElderry, oh what a stand-up. Alexandra pull your socks up, where your hits at? You ain’t no winner I feel bad cos your voice is amazing but your career’s getting raped by a mason."

Not only is Dappy using this freestyle as a platform to piss off the British music industry, he also does quite well at slipping in a few I-am-quite-literally-the-bollocks-esque lines:

"King of the jungle, hard as can be, I dare you to let your chick party with me/ I'm Tarzan and I'm hung like a tree" - (and those of you thinking "Yeah, a f*cking Bonzai tree mate", clearly haven't seen the Dappy nudes that went viral in 2011.)

Well, I think I speak for everyone when I say I cannot wait to see the repercussions of this.

ONE TO WATCH: Ria Ritchie

Keep your eyes peeled and your ears uber-alert for this young lady - Ria Ritchie. Hailing from Lowestoft, Ria took to recording herself singing in her bedroom and uploading them to Youtube.

Now having received more than 10 million hits, she's well on the road to stardom. With fans such as Tinchy Strider and Dappy, Ria has also been spotted by Plan B who has even started work with her.

Recently performing for MOBO TV, Ria is making waves on both the urban and popular music scene, and has already collaborated with producers such as Sam Frank and Craze & Hoax. Ria has also toured with Example and Wretch 32.

With big connections like these under her belt and an astounding voice, we're predicting big things for this little lady.